Announcement of the price of the new flagship of the GM, the Marvel R electric car

Marvel R car !!! Hello and greetings to each and every one of you, car news companions, instantly and up to date… !!! We hope you are well !!! We suggest you do not move because you have hot news; So until the end of this news, you have heard the announcement of the price of the new flagship ‌ MG, Marvel R electric car, stay with us…

MG is expanding its sales market in Europe with new products, and Marvel R’s all-electric flagship will help. MG has been constantly on the move since its inception, selling to Morris Motors in 1935 and becoming British Motors a few years later. It was then taken over by Austin Rover in 1982, acquired by BMW in 1994, and finally in 2005 by two Chinese companies, SAIC and Nanjing. Emoji cars are designed and developed in Long Bridge, England and Shanghai, China, respectively, and then built in China.

If you are familiar with this name, you should know that you will not encounter a completely new car because this car has been presented in the Chinese market since 2020, and in fact, this is a redesigned version of the Marvel X, which was released in 2018. The Marvel R It was introduced two years later. And now he plays the role of Marvel R Spiritual Paddy. MG has put its markings on this car and no other special changes can be seen. The LED headlights are all-round, and the combination of the bumper and its slits give it a modern look.

The Marvel R is available in three levels of luxury, comfort and performance. The luxury and camphor models are powered by two electric motors on the rear axle that produce 177 horsepower and 410 Nm of torque. It accelerates from 0 to 100 km / h in 7.9 seconds and reaches a top speed of 200 km / h. The performance version has three electric motors, one of which is located on the front axle and its combined output reaches 284 hp and 665 Nm. 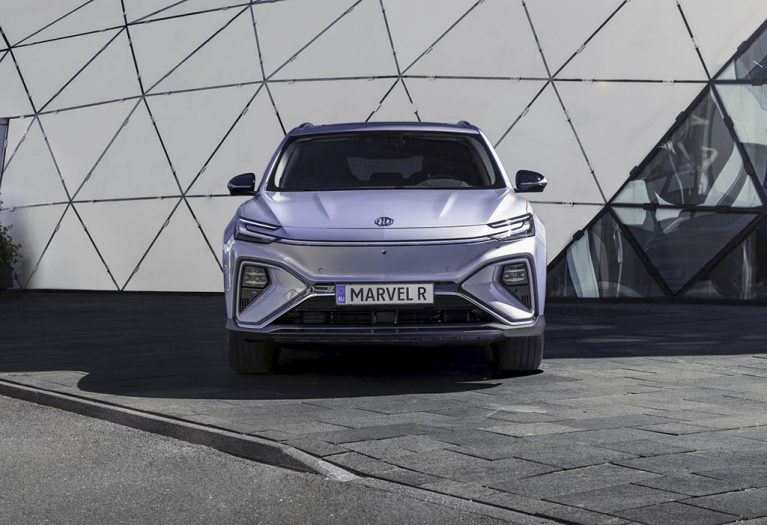 The Vehicle-to-Load standard also allows the battery to power external electrical systems with a maximum load of 2,500 watts. MG claims that the 5-seater cabin of this car is equipped with first-class raw materials and generous equipment. The capacity of the trunk at the rear is 357 liters, and of course you will have an additional 150 liters of space under the front hood.

Luxury and performance trims benefit from a 360-degree camera, ambient lighting, heated seats and a premium Bose sound system. In terms of safety, the MG Pilot set, which includes 14 ADASs, including a traffic assistant, will greatly ease your mind. In the European market, the MG Marvel R will be sold alongside the MG HS plug-in hybrid and will compete with the Kia Niro, the Skoda Eniak EV and the Volkswagen ID.4. Prices for the Comfort version start at 39,990 euros ($ 46,000). The luxury model is 10,000 euros more expensive and the flagship version will be sold for 47,990 euros or 55,000 dollars.

Thank you dear ones for the end of this news about Marvel R car; You have been with us and supported us as much as possible with patience. Here is the announcement of the price جدید of the new flagship ‌ MG, the Marvel R electric car that I hope you enjoyed reading… to stay up to date with the latest car news; Follow us daily and continuously… Now your heart is happy and your lips are smiling for

Thank you for being with the Rentauto car rental company until the end of the article “ Car Marvel R ”; Wait for an article more scary than us (:

Announcement of the price of the new flagship of the GM, the Marvel R electric car