Facelift Kia Forte … !!! Greetings and greetings to all of you, good companions and supporters of car news; We hope that in October, your heart is fine and you are healthy; We are with you with another series of daily news about the introduction of Facelift Kia Forte model 2022; Without further ado, let’s get to the point:

After the introduction of the Kia K3 Facelift in the Korean version, the 2022 Kia Forte Facelift has now been introduced for North America. Kia Forte, which is known as Cerato in our country and in some other countries, is one of the most popular and popular products of this Korean company, which has had good sales statistics. The latest model of Kia Cerato that is present in our country is the 2018 model with the YD model, which has been introduced in the 2019 model of the new version of this car and has been facelifted in several stages for different markets.

Launched in markets around the world under the various names K3, Cerato and Forte, this compact sedan has entered the third generation since 2018 and has now experienced its mid-range facelift. Facelift Kia Forte Model 2022 will be available in four different types called FE, LXS, GT-Line and GT with custom technology and premium sports packages in the US market.

As we saw in the Korean version, the new Forte features a redesigned front nose with new headlights integrated into a slim windshield called a tiger snout, and a more aggressive bumper with new air intakes and additional LED headlights. The volume of changes in the rear of the car, however, is smaller and can only be summarized in cases such as a minor revision of the bumper, new graphics of the headlights and the new Kia logo. 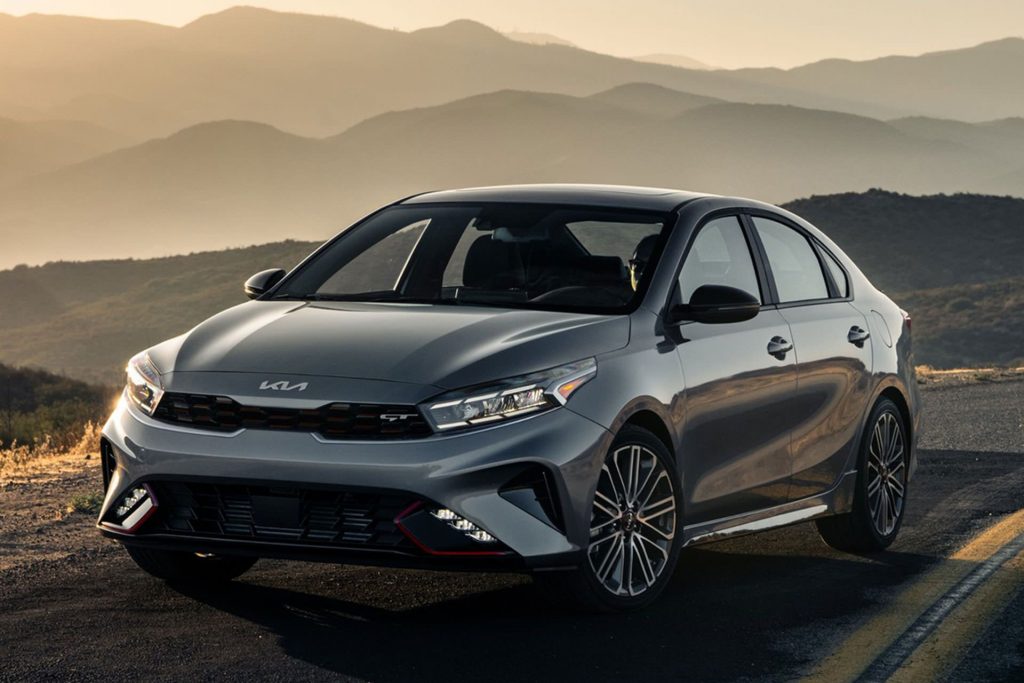 The GT versions also feature red trims on the bumpers and windshield, along with a small spoiler at the edge of the trunk. Kia has also introduced new 16-inch and 17-inch wheels for this car. The Ford Model 2022 is equipped with an 8-inch touch screen in the FE and LXS models and a 10.25-inch screen in the GT-Line and GT models, both of which have Android Otto and Apple CarPlay wireless; But in the American version of the car, there is no mention of the attractive 10.25-inch all-digital amp screen offered in the high-end versions of the Korean version, and buyers should be content with a small 4.2-inch display in the middle of the analog amp screen.

For Facelift Forte, new equipment such as electronic handbrake with auto hold, custom USB rear charging, synthetic leather upholstery and smart switch with remote start are provided, and safety equipment now includes six new assistive systems as standard and up to fifteen different systems such as driver assistance. On the highway, cruise control based on navigation and safe exit warning is customized.

Facelift Kia Forte model 2022 is offered as before with two different engines. The FE, LXS and GT-Line are powered by a naturally aspirated 2-liter four-cylinder engine with 147 horsepower and 178 Nm of torque, which is transmitted to the front wheels via a CVT gearbox. The GT, however, uses a more powerful 1.6-liter turbocharged four-cylinder engine that produces 201 horsepower and 264 Nm of torque. Seven-speed dual-clutch or six-speed manual transmissions will be available for this version.

The Kia Forte GT Facelift is also equipped with more powerful brakes, dual exhaust heads and a sporty suspension adjustment with a multi-link design at the rear. The Forte 2022 will be produced in Mexico, but Kia has not yet announced its price. We also still have no information about the fate of the Forte 5 hatchback because Kia has only introduced the Forte sedan for the 2022 model.

Thank you dear ones for the end of this news related to Kia Forte Facelift; You have been with us and supported us as much as possible with patience. This is the introduction of the 2022 Kia Forte Facelift, which I hope you enjoy reading… to be informed about the car news of the day; Follow us daily and continuously… Now your heart is happy and your lips are smiling…

Thank you for being with the Rentauto car rental company until the end of the article “Facelift Kia Forte ”; Wait for an article more scary than us (:

To know Kia Sportage Chassis High ; Click on the link