Ferrari long chassis … !!! Hello to all the supporters and fans of car news, it is also an update !! Good day and happiness; We hope that your single heart is fine and great !! Today, we are at your service with a news item, namely the revelation of images of the first Ferrari long chassis… Do not move after Jatun and stay with us until the end of this news !!!

Ferrari’s first SUV, the Purosangue, meaning “thoroughbred (horse)”, will be launched in late 2022. Perhaps the reason why Ferrari chose this name was that while evoking its logo in their minds, it sent a message to the audience that although this car is not a typical Ferrari supercar, but it is still a genuine Ferrari. The car will be the most powerful gasoline chassis in the world if released, and will become a serious competitor for the Lamborghini Urus and Aston Martin DBX.

Now, with the leak of spy photos of this car in the car’s factory of Maranello, we can overthrow its appearance for the first time. Looking at these images posted by accounts, including “cardesignworld” on Instagram, you can see features such as a stretched hood, coupe-style sloping rear, shiny LED headlights, side-volume on doors and rings. He saw the silver alloy, which is strangely small, in the design of this car.

Although this Ferrari chassis was recently seen in Italy under thick camouflage sheets, this is the first time that its appearance can be seen more clearly. It is unknown at this time what engine Ferrari will use. However, according to some reports, the flagship model will be offered with a non-turbo V12 engine alongside a base model with an electric V6 or V8 engine. If this is true, the flagship model of this car will probably become the most powerful gasoline chassis on the market.

The Ferrari Porosangue product line is scheduled to go into production later this year, with the first prototypes likely to hit showrooms in 2023. Despite Ferrari’s refusal to enter the segment, and especially the years of resistance from former Ferrari CEO Sergio Marchionne, the company has finally decided to build one because of growing demand for large five-door cars, especially in emerging markets such as China, Russia and the Middle East. He took the long chassis. 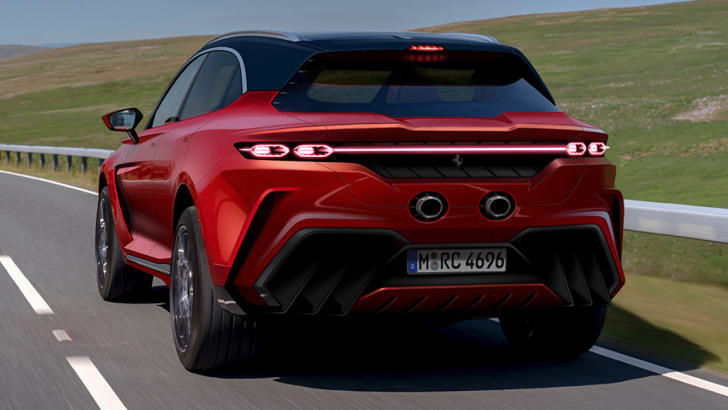 Of course, Ferrari is not easy to compete in this market, because its competitors such as Lamborghini, Aston Martin and Porsche have already introduced quality passenger cars in this segment. Chassis cars have become very popular in the last decade and their market share has more than doubled. Last year was a special year for the classic Italian brand, and the automaker sold 11,155 more Ferraris than any other year in its history.

Muchker from reading Ferrari long chassis; You were with us until the end of the news about the revelation of images of the first Ferrari long chassis. To be informed and informed about the daily news related to the automotive industry and field and all the related margins, it is also updated and continuous; follow us. We hope you are happy; Be smiling and full of food… !!

Thank you for being with the Rentauto car rental company until the end This article ; Wait for an article more scary than us (:

To know Internal combustion vehicles ; Click on the link