Fiat crossover …!!! Hello and don’t be tired, to the listeners and fans of car news, it is also of the latest type!! Have a nice and happy summer day; We hope that every one of you will feel good about this news!! Today we are at your service with a new news about the unveiling of the Fiat crossover called Fastback… so don’t move and stay with us until the end of this news!!!

Fiat has unveiled a crossover coupe called Fastback, which is intended for South American markets such as Brazil and Argentina. After the success of coupe crossovers in the luxury segment of the market, these cars have also become popular among economy brands, and the fastback is Fiat’s first appearance in this popular segment. This car is built after the concept that was introduced in 2018 with the same name, but as expected, the design of the fastback has been adjusted compared to the concept version and now it is considered more like the coupe version of the Fiat Pulse crossover. Both of these cars are based on the MLA platform, which was developed for South America.

The Fastback has borrowed many parts from the Pulse, including headlights, grille, hood, front fenders and front doors, while the front bumper is also taken from the Abarth Pulse version. However, everything from the front doors onwards has been redesigned, giving the car a more aerodynamic shape. At the back, the narrow horizontal lights are very similar to the BMW X6, while the high slope of the rear window and the integrated spoiler with the trunk lid are designed according to the fashion of coupe crossovers these days.

The rear overhang of the fastback is much longer than that of the Pulse, and a diffuser and decorative exhaust tips are used on the rear bumper. The example you see in the pictures is white with a black roof and uses unpainted plastic covers on the body. Fiat has yet to release a picture of the interior of the Fastback, but it will most likely be the same as the Pulse here. This means that inside the car we will see a 7-inch digital amp screen and a 10.1-inch infotainment touchscreen. 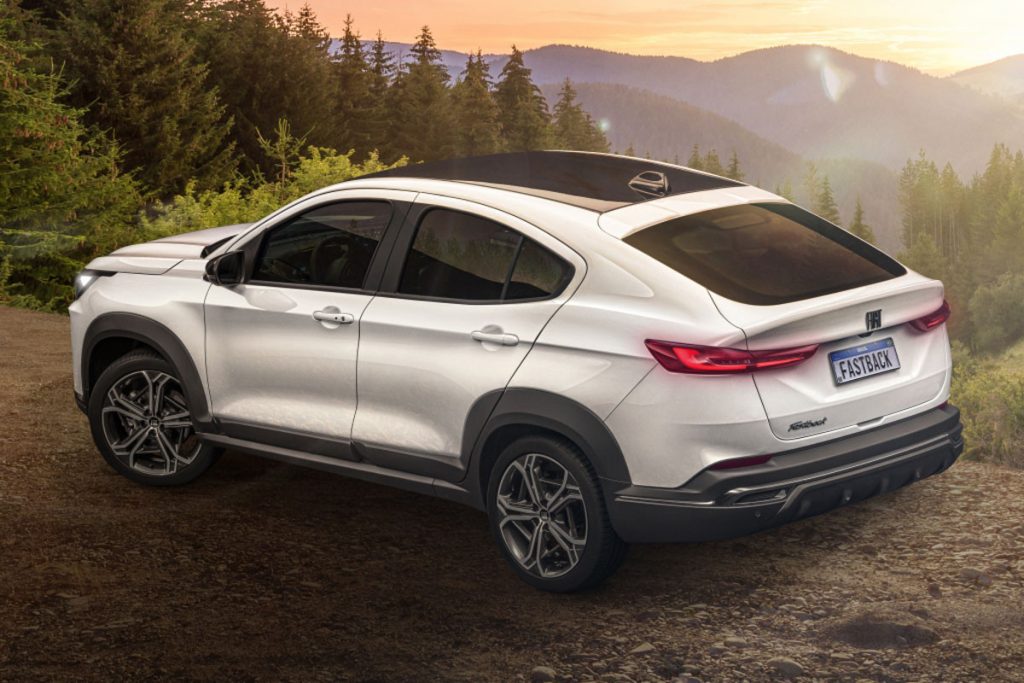 The Italian manufacturer also did not say anything about the technical specifications of its crossover coupe, but according to local media, the fastback has a 1.3-liter naturally aspirated engine that has 107 horsepower and 134 Nm of torque, along with a 1-liter turbo unit with 130 horsepower. Steam power and 200 Nm of torque will be offered to the market.

Both of these engines are now available in the Pulse and send their power to the front wheels through either manual or CVT gearboxes. We’ll know more about the Fastback in the coming months when it hits the South American market. At the moment, we do not know if Fiat plans to export this crossover coupe to other markets or not, but considering the platform and its exclusive design for South America, it is unlikely that we will see the Fastback outside of this region.

Thank you, dear ones, for reading this news about the Fiat crossover until the end. You were our companion and supporter as much as possible. Here is the unveiling of the Fiat crossover called Fastback, which I hope you enjoyed reading… to know and be informed about the news of the day; Follow us daily and continuously… your heart is happy and your lips are smiling…

Thank you for being with the Rentauto car rental company until the end of the article “ Fiat crossover ” ; Wait for an article more scary than us (: