Crossover Geely … !!! Greetings and greetings to all of you, good companions and supporters of car news; We hope that in October, your heart is fine and you are healthy; We are with you with another series of daily news about the unveiling of the cheap Geely crossover ‌ EX3 Geometric electric price; Without further ado, let’s get to the point:

The Geometry sub-brand, founded by Geely China in 2019, unveiled the all-new EX3 model. An all-electric baby SUV with an attractive starting price of $ 9,200, making it the most affordable 5-seater electric car on the market. Geely Automotive Group is owned by Geely Holding Group.

In 2010, the holding acquired Swedish company Volvo Cars from Ford, and in 2013 acquired a British taxi company. In 2017, Lotus was acquired by Geely. Geely Holding’s other asset is 9.7% owned by Daimler- Benz . Geely Holding now sells its passenger cars under the Geely, Lotus, Link Endco, Proton and Volvo brands, as well as its commercial vehicles under the London EV and Yuancheng brands.

Geometry EX3 is a car with a stylish design. The headlights are reminiscent of the Peugeot 308 and have a windshield with vertical lines, most of which are closed. There are green decorations on the top of the windshield and the roof. The length of this car is 4 meters, its width is 1.76 meters and its height is 1.57 meters and the distance between its two axles is 2.48 meters. 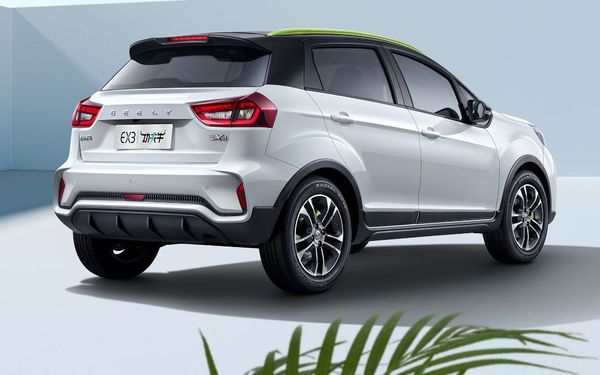 So we’re dealing with a compact crossover. Despite its compact size, the EX3 does not appear to be space-deficient. Geometry introduces this car with a spacious cabin that has enough space and comfort for five passengers, and a total of 26 compartments are provided for placing various objects in it.

Cargo space is also 500 liters , which increases to 1050 liters by folding the rear seats. The dashboard looks relatively modern for a cheap car. There’s a 10.25-inch digital display for the driver and an 8-inch touchscreen for the infotainment system. Black and blue coatings are combined with fluorescent decorations and suede-like materials to create a pleasant and cheerful atmosphere. Equipped with a 95 hp and 180 Nm electric motor.

This power and torque is equal to that of gasoline class cars. The 37.23 kWh battery, which operates with liquid cooling, can provide a range of 322 km according to the Chinese NDEC standard. In addition, with the help of high-speed DC chargers, batteries can be charged from idle to 80% in less than 30 minutes, with this amount of charge, you can travel 250 km. The EX3 Geometry will initially be available in China and through dealerships in 20 cities, but aims to be exported to other markets in the future.

Thank you dear ones for the end of this news related to Geely Crossover; You have been with us and supported us as much as possible with patience. What is the method of detecting the actual function or distance of the car? It was announced that I hope you enjoyed reading it… to be informed about the car news of the day; Follow us daily and continuously… Now your heart is happy and your lips are smiling…

Thank you for being with the Rentauto car rental company until the end This article; Crossover Geely ; Wait for an article more scary than us (: