Unveiling of the Kess supercar with 3,000 horsepower

Supercar Ki Ace … !!! Hello and greetings to all supporters and fans of car news, it is also an update !! Have a nice summer day; We hope that this news is good and great !! Today, we are at your service with the news of the unveiling of the Kess supercar with a 3,000-horsepower engine Do not move after Jatun and stay with us until the end of this news !!

The unveiling of the 3,000-horsepower supercar and the $ 14 million supercar will enter a new phase in the world of supercars and super sports that could not have been imagined to come true one day. Leading the way was the Bugatti Veyron and then the Bugatti Veyron, and most recently the supercar Remak with about 2,000 horsepower and about 2,400 Nm of torque, which is also very exciting to imagine.

But the SP company has gone a step further and unveiled a supercar with 3,000 horsepower. Yes, you just realized that 3,000 horsepower lies in the driving force of this car.

What about a car with 3,000 horsepower (2,237 kW)? In this case, “chaos” would be an accurate description. The new Greek automaker Spyros Panopoulos, or SP Automotive, has created this “ultracar” called the Chaos supercar. After the initial launch campaign, today we see a full version of this supercar, and as its name suggests, it looks attractive and exciting. 3,000 horsepower and 12,000 rpm of the 4-liter V10 engine Equipped with twin turbochargers, it comes with an unspecified hybrid assist system.

The Automotive says that the Kies only takes 1.8 seconds to reach 100 km / h from standstill and a top speed of 499 km / h. This is the most powerful version of the Kies and is priced at a staggering $ 14.4 million. However, buyers looking for a simpler option can opt for the base supercar with just 2,000 horsepower. 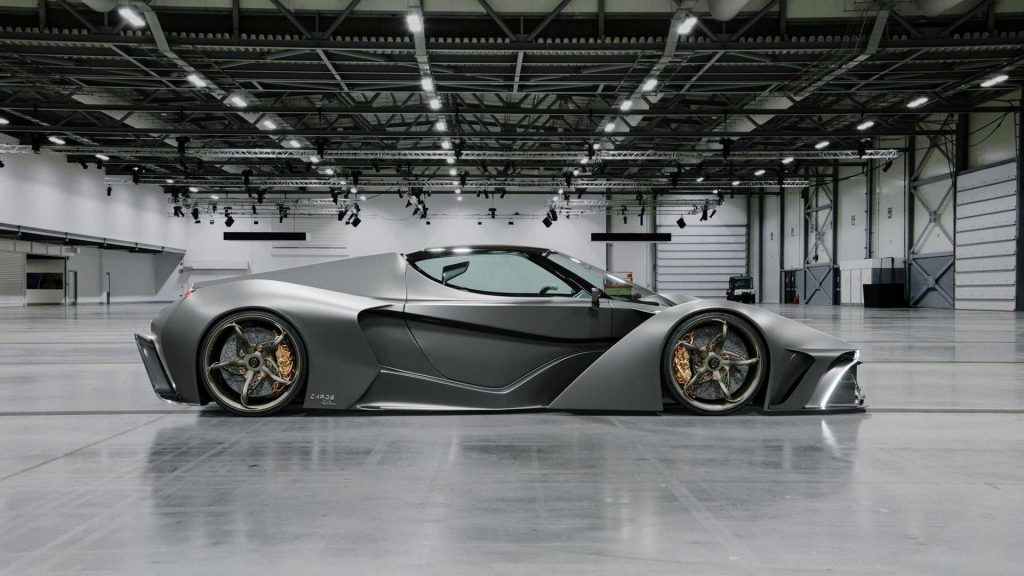 The less powerful version uses the same 10-cylinder turbocharged engine with some modifications and less tuning without the help of a hybrid system and is relatively cheaper at $ 4.6 million! Both engines use dual-clutch gearboxes, while the four-wheel drive system The standard is provided in this pair.

To ensure that the super-Kies supercar stops, the SUV has equipped the coupe with two large discs (16.9-inch brake discs at the front and 16.4-inch discs at the rear, which are built behind a set of 22-inch wheels. 3D printing is hidden. SPO officials say they will try to break almost all the speed records in the Guinness Book of World Records with all the available power of KIOS.

The Kess supercar will strive to reach the Nürburgring time (6 minutes and 43.30 seconds) of the Porsche 911 GT2 RS, the top speed of 460 km / h (1.286 mph) based on the Toatra, and even Remak Remak Nora’s record of 58.8 seconds. Take off a quarter of a mile. The SPU plans to produce only between 15 and 20 Kies supercars a year, but depending on customer demand, it could increase production to 100 units. The company makes all versions of the KES by hand, and customers can order their cars with a number of different features. reach

Thanks for reading the introduction of the supercar; You were with us until the end of the news related to the unveiling of the Kess supercar with a 3,000-horsepower engine. To be informed and informed about the daily news related to the automotive industry and field and all the related margins, it is also updated and continuous; follow us. We hope you are happy; Be smiling and full of food… !! In the shelter of the right .. !!!

Thank you for being with the Rentauto car rental company until the end of the article “ Supercar Ki Ace ”; Wait for an article more scary than us (:

To know Honda Civic C ; Click on the link

Unveiling of the Kess supercar with 3,000 horsepower